Reverse Engineering a file format The Beginnings of Minimalism

Reflecting on a Year Without Goals

It’s been a while since I wrote anything on this blog. I’m feel bad about that, and it’s a food example of my last year.

I started this last year with the expectation of getting quite a bit done since I’d have more free time. I also tried to follow the ‘no goals’ philosophy of Leo Babauta (of zenhabits.net) more or less.

It turns out that doesn’t work out for me. I respect Leo and love most of his content, but the idea of living without goals is something that I can’t attain, at least not yet. I’m more of a goal-oriented person. This is a personal post, so it might be a little rambling. Sorry for that.

Prior to the start of this attempted philosophy I had all kinds of ideas for projects that could bring either personal satisfaction or financial freedom. This was the process each of them eventually went through:

I don’t recommend this process. It’s incredibly frustrating. This process came from a good starting place – setting goals. I would try to figure out what the steps were to start and succeed on a project, but in doing so I would overwhelm myself.

Over the last year I’ve started a good number of projects. Most of them have failed, but I’ll get to that later. Here’s how my process changed since I’ve been moving along without goals:

Better? Probably not. Having not thought through much the projects usually had a very sketchy start and several of them didn’t make it past that point. Actually, here are some of the issues I’ve run across when doing little to no goal setting:

There are many more issues as well, but you get the idea.

The manifestation of all this is that the projects never finished. It’s one thing to start a project and abandon it because it isn’t working out or I realized my skills weren’t up to par. That’s not what was happening. I was abandoning projects because I lost focus and got distracted. This can happen to anybody on any project, I know, but it happened to literally every project I started during this time frame.

It boils down to something I already knew, but had to re-learn:

Of course it’s important. Though, to be fair, organization and goals are not synonymous. The issue I had was that in doing away with goals, I did away with much of my organization. I had thrown the baby out with the bathwater. Knowing this, I could probably figure out how to be more organized without having goals, but I think that may be beyond me right now. At this point in my life, it seems that organization and goals are tied together in a way I can’t separate. Goals may create unnecessary stress for some people, but now I believe that this stress is necessary for productivity in some people (myself, for example).

Oddly enough, getting rid of a list of tasks removed both of these. It turned out that when everything is unknown there’s no need to stress out about it. Part of the stress of unknowns is caused by having to have everything in a nice box. “Oh this task? That will take somewhere between 3 and 5 hours.” The problem comes up when I would have a task on the list and think “I have no idea how long this will take. Should this be its own project, or will it take less than a day?”

Those questions simply went away.

Moving on From Here

I know that I’ll keep coming back to this year of experience time and time again. Due to the low perceived cost of entry, I went into a number of different things that I never would have attempted otherwise. I broke free of some of the tunnel vision that had been keeping me from seeing opportunities. On the other hand, I ended up a long list of half-done projects. Most of them not worth finishing at this point.

Let me explain that second one a little. Goals in and of themselves aren’t counterproductive, but thinking about them too much too far in advance can be. I’ll explain.

When I first have an idea at t_0 I’m super motivated to get something done. As time goes on though, I lose that initial burst of motivation and there’s nothing else to keep me going. Then I hit t_1 and end up either distracting myself or giving up. This is not a good way to finish a project. 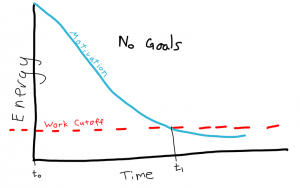 Let’s say I add some goals. I didn’t label things as well on this graph, but bear with me. Basically, all of the time up until the ‘effect of goals’ starts moving up is the time I spend figuring out the goals of the project. Typically this will be before I get going on the actual project. As you can see, it drags down my productivity and wastes the best time at the beginning. However, event if the goals are well formed and I follow through I often end up with something like this sketch: 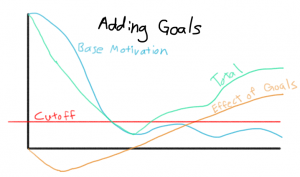 You’ll notice it goes below the cutoff. That means the project dies. I give up, throw it away, or move on. I think this can be fixed by not starting on the goals until after I’ve dug in on the project. The reason that the effect of goals starts out negative is that all that time at the beginning that I spend working on goals puts a damper on my enthusiasm for the project. It also shows me the true scale of what I’m trying to accomplish. I’m just going to go out on a limb here and say that knowing the true scale of something is probably a bad thing most of the time. The project seems so immense that I think “there’s no way I could do that” even though I have done things that size or larger.

I think, and I want to test this, that going in with a general idea of what I’m doing right away, then setting small goals as I go in the initial steps of a project can get me farther than trying to come up with the 5-year and 10-year plans for a project from the beginning.

As an arbitrary cutoff, I’m going to say that I won’t plan out any project more than a month. I’ll try to keep this up to date as I go, but let me put down an example.

I want to write a nonfiction book. I have a few ideas on a specific topic and approach, but I haven’t nailed it down yet. Now, I know that writing a book that’s worth something is more than a one month project. That’s fine. However, my goals will all be things I can accomplish within one month. I know I won’t be done with the book by then, but it doesn’t matter. It’ll be done when it’s done.

Although I could dwell on the time I spent and how few of my projects came to completion, I’m going to instead learn whatever I can from the time and try to figure out how to apply it to the future. Who knows, maybe I can even write a book on goals at some point, from the perspective of someone who let go of them for a while without success.

I know this post was meandering and disjointed. I’ll do better on the next one. In fact, I plan to write about my experience trying to write and publish a nonfiction book right here on this blog. This will be my first big project with no long term goals, only mid and short term.

Because who can predict what life will be like 5 years from now.